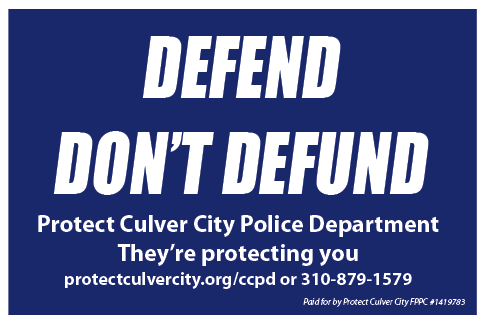 This election will decide whether Culver City continues to have a police department.

Council will meet on October 12th to discuss police budget. We expect them to discuss this defunding issue. Click Here for the latest council meetings and action plans

Several candidates have called for the defunding of our police department by 50% or more. They are endorsed by outgoing Councilmember Sahli-Wells, who is behind the “defund” push in Culver City, calling herself a police “abolitionist” at Council. Candidates Freddy Puza and Yasmine McMorrin have explicitly called for 50% cuts. Candidate Darrel Menthe has sidestepped the issue, talking about “reimagining public safety” instead. He comes endorsed by Sahli-Wells, and we expect him to vote to defund if elected.

If any of them is elected, they will form a majority with councilmembers Fisch and Lee to defund our police, with the intent to abolish it.

The Culver City Police Officers’ Association has been doing a great job standing up for themselves. They have endorsed candidates Goran Eriksson, Albert Vera, and Heather Wollin. While we are not endorsing candidates, we defer to them and urge people to vote accordingly.

They have already come under attack by a small, loud activist minority along with councilmembers Fisch and Lee. Councilmember Sahli-Wells has called their campaign hate speech, a chilling term which has provoked legal action from them. They can’t fight this on their own. Culver City residents need to stand up and fight for our police department this election, or we will lose it.

The process began on June 15th, when a loud, organized minority with ties to councilmembers dominated the early comments of the meeting. They demanded council cut our police department budget by 20% or more. They were motivated by recent calls to “defund the police” in the wake of George Floyd’s death.

“Defunding” is exactly what it means – taking funds away from our police department, with an intent to abolish it.
This “debate” was never agendized and few residents had any idea this was happening. Council barely rejected their initial demands on June 15th for an immediate 20% cut by a narrow 3-2 vote. Such drastic cuts would have taken place as soon as July 1st – leaving our police department unable to do its heroic work during the riots of May 30th and 31st.

In response, this same organized minority made a new demand – a 50% cut to CCPD within three months, which they presented at he June 22nd meeting. Council agreed to establish a task force to explore this. They at least agreed to keep this task force limited to city staff and not subject to outside control. But this debate is far from over. And few residents still have any idea this is happening.

Our police are what keeps our neighorhoods safe, and we can no longer take them for granted. That’s why we need your help to “Defend Don’t Defund” Culver City Police Department. We need you to post a yard sign, distribute flyers, alert your neighbors. People need to understand the radical changes this group is pushing on our city, and how entrenched they are in various boards and commissions.

Our police department enjoys a 78% approval rating. Council’s rating is only 47% and dropping. Defending our police department should be an easy task. But when a small, committed minority is this entrenched in city government, it will take a serious fight to keep it the way we want it. We must protect Culver City Police Department. They’re protecting us.

On the weekend of May 30th and 31st, riots and looters hit a number of neighborhoods throughout Los Angeles.  We all witnessed the looting of 3rd St. Promenade and, Melrose and Beverly Blvds, and Long Beach.  Even Rodeo Drive wasn’t spared the mob.  Culver City remained conspicuously pristine. Aside from a few scattered spots, our major centers remained untouched: Fox Hills Mall , Downtown Culver City, Culver Center on Washington and Overland, Costco.

This wasn’t an accident or routine task.  Culver City PD did a heroic job protecting all these spots from looters.  Looters came in caravans, alerted by social media, in coordinated campaigns.  Our police force were proactive and ready for them.  They monitored social media, set up barricades at key entrances, and anyone stepping foot in key hotspots was quickly swarmed and escorted off.

For this heroic feat, our council will debate cutting the police department’s budget on June 15nd by a third.  If council goes through with these budget cuts, they could take effect as soon as July 1st.  Effectively rewarding our police department’s heroics with pink slips, leaving it unable to continue to do exactly what they did.

Our current council, led by councilmember Meghan Sahli-Wells and her “Gang of Four” – vice-mayor Alex Fisch, and councilmembers Thomas Small and Daniel Lee, is leading the charge.  They are jumping on the “Defund the Police” mantra which emerged after the death of George Floyd.  Defunding is exactly what it means – no longer paying for police.  A third of the budget could be gone as soon as July 1st, and the rest of the budget gone soon after.

We’d like to think we’re over-reacting. Unfortunately, when our councilmembers are jumping on this issue the way they have been, we have to take them seriously that they will act on it. With disastrous results.

Their rationale is police are a throwback to a slavecatcher past and rooted in racism.  In fact, any use of force is racist.  Such rationales are laughable.  We literally have a pristine Fox Hills Mall to contradict them.  But as we’ve learned these past two years, current council is blind to reality and deaf to residents.

As of this posting on June 10th 2020, our city is still largely boarded up because of the looting and riots.  But boards alone don’t protect our businesses.  The ability to use force against those who would do us harm, in a civilized fashion, is that thin blue line that keeps our city from ruin.

Culver City’s Police Officer’s Association has released a statement about this, and we highly suggest people read it. They are fighting back, but they can’t fight this alone. As our police department defends us, we must return the favor and defend our police department.

The criticisms levied on our police department since the death of George Floyd have been nothing more than smears, fairy tales that hearken to a bygone era of redlining and sunset town clauses that date back to the 60s, if not the 20s.  Today’s CCPD is the most diverse is ever been: sworn personnel makeup is 39% White, 38% Hispanic, 10% Black, 6% Asian, 4% Pacific Islander, and 3% Middle Eastern.  Actual complaints about racist treatment are nil, unjust killings are nil.  Meanwhile, our elite police department delivers a level of safety that brings people to our city in droves – to live, shop or work.  People of all walks of life, of all races and ethnicities.

Even if we do drive these points home, our council has proven itself to be an unbreakable Gang of Four that votes lockstep.  Here’s our analysis of those four:

Meghan Sahli-Wells and Daniel Lee are both hooked on fairy tales that our city can continue without a proper police force. When they say “defund the police” we need to take them both seriously.

Alex Fisch – makes pretensions to be centrist and rational, but consistently sides with councilmember Sahli-Wells.  Barring a recall effort, he’s in office until November 2022.

The one dissenting voice in our current council is mayor Goran Eriksson. He has steadfastly defended our police department against smears on their reputation.

The Black Lives Matter people sprang into action after the death of George Floyd, taking to the streets to demand defunding or abolishing the police.  We can no longer dismiss such protests, or their disastrous consequences for our city.  If we are to preserve our own police department, and our city itself, we need to mobilize ourselves.

We hope you will leave a comment at the June 22nd council meeting defending our police.  To get more involved, please reach out to us on our contact page.